Millrock and Volcanogenic Massive Sulfides at the Ferris-Haggarty mine, Sierra Madre, Wyoming 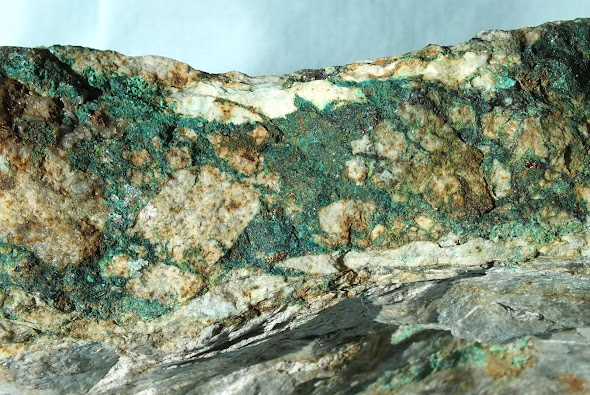 A long time ago, more than a billion years in the past, the southern Sierra Madre of Wyoming was a flat ocean floor within a vast Proterozoic ocean near a subduction zone, where many submarine hydrothermal vents, along with white and black smokers, erupted hot spring gas, liquids and  metals which cooled and crystalized into sulfide minerals that filled spaces in fragmented rock. Several such deposits formed in this ancient ocean in areas that are now part of Wyoming and Arizona. For example, the great Ferris-Haggarty mine in Wyoming, produced some excellent copper-gold-silver rich 'millrock' (volcanoclastic) such as seen in the adjacent photo of a specimen I collected from the rib of the Ferris-Haggarty mine. And then, there was the world-class copper-lead-zinc-silver-gold massive sulfide at Jerome: talk about an incredible deposit!
What is millrock?
Prior to 1979, I had not heard of the term 'millrock'. So, when a geologist from Conoco Minerals made a discovery of millrock with colloform massive sulfides at the Itmay mine in the Huston Park area of the southern Sierra Madre, I had to educate myself about these deposits. Being the minerals geologist at the Wyoming Geological Survey on the UW campus, it was imperative I learn all I could about this new discovery because our office was being invaded by Canadian companies who wanted to also search for millrock. Well, it turns out that millrock is nothing more than a volcanoclastic breccia associated with submarine volcanic vents and is often associated with volcanogenic massive sulfides (Edwards and Atkinson, 1986). Just think of millrock as a fossilized, submarine volcanic vent associated with all kinds of massive copper, zinc, lead, silver and even some gold.
Canadian geologists were well schooled in these types of mineral deposits - they had many up north. This was also true of geologists from Arizona's universities. Such deposits were found on ocean floors where considerable hydrothermal activity occurred. So, massive sulfide metals deposits adjacent to active and prehistoric vents, are referred to as smokers (no, not the cancer-affiliated smokers). And it turns out that the Canadians, who were mining several of these massive sulfides, recognized that the brecciated, volcaniclastic rocks near these smokers and sulfides, were almost always found next to operating mills at operating mines - so, one wise geologist named it 'millrock'.
Other things of interest around these massive sulfides include colloform textured massive sulfide deposits that likely congealed in oceanic water to produce rounded blebs of sulfide minerals deposited on the sea floor. Other ore occurs in the volcaniclastics (the millrock). The larger the clasts in the millrock, the closer you are likely to be to the original volcanic vent, and potentially, a Mother Lode.
It turns out that after Conoco Resources found the first volcanogenic massive sulfide deposit at the Itmay mine, other massive sulfides were discovered in the region. So many were found that the Forest Service had to take a deep breath, give up their 8-hour coffee breaks, take some Xanax, and then work an hour or two each week following companies and following geology students who began working on master degrees in the UW geology department under Dr. Robert Houston So, whenever a potentially economic deposit was found, the Forest Service piecemeal withdrew it from mining. And you thought that the US Forest Service was a manager of our public lands.
Unfortunately, no one told them. The FS office in Laramie wanted to withdraw the entire Sierra Madre and Snowy Range from miners, even though their directive suggested they should be working for the public, rather than their own. It appears that the Laramie office was filled with card-carrying Sierra Club members who were anti-mining, anti-logging, anti-people, etc, etc.
It turns out that Arizona also had Proterozoic-age island arcs with very favorable volcanogenic massive sulfide (VMS) deposits (Hausel, 2019).  Not only were some enormous VMS and porphyry copper deposits found in the Patagonia Mountains near the old ghost towns of Harshaw and Taylor in southern Arizona (some of which are classified as major to world-class deposits), there are also famous VMS deposits at the old United Verde and United Verde Extension mines at Jerome in central Arizona. Then there are many more, nearby, VMS deposits.
The United Verde mines were extremely rich massive sulfide deposits - so rich, that mining companies made a fortune mining only the high-grade ore and leaving behind huge tonnages of low-grade ore that likely has considerably more tonnage than the high-grade mined in the past. Some of the high-grade was so enriched in sulfides, that when oxygen reached some of these sulfide ores brought in the mine tunnels, the oxygen began to oxidize ore, giving off so much heat, that some of the rock actually caught fire and burned for years. Just imagine, a rock catching fire in a mine! Within the mine operations, the miners also found excellent black and white, fossilized, smokers that were the source of the ore.
Banded chert was also found in the mines and likely represented siliceous submarine volcanic eruptions that slowly settled by specific gravity in the water, producing color bands based on of slightly differing specific gravity.
So, similar VMS deposits to Wyomings occur in Arizona.  The VMS deposit at the Ferris-Haggarty mine unfortunately was only partially mined, and no one knows how much ore remains in the ground. Based on the geology of the area, I suggest it could be another Mother Lode. As for the nearby VMS deposits to the Ferris-Haggarty, most were withdrawn from mining as soon as they were discovered, between 1979 and 1984(?).
Such massive sulfides and associated veins occur at a number of localities in the Sierra Madre, such as at the Broadway deposit, Kurtz-Chatterton, and others. But these do not even get close to the number of VMS deposits recognized in Arizona.

Millrock exposed in F-H mine rib